After checking through our voluminous archives of 3hive’s unpublished stuff, I found that my friend and colleague Sean was thinking of posting Canadian singer-songwriter Barzin back in November of 2006. Since the statute of limitations has expired, I’m gonna run with it. Like Josh Hayden’s old band Spain, or maybe Mark Kozelek’s Red House Painters, the songs of Barzin move at a snail’s pace. What may not be clear, though, is that it’s a beautifully passionate and intricate snail suffused with longing, filled with the heartbreak of being trapped in its rigid shell. In other words, Barzin rocks it low and slow, with strings here and vibraphone there, never losing control of the specific and delicate emotional precision of a moment. Over the course of three albums, Barzin has stayed quiet, which is naturally a welcome if not absolutely musical necessity in a world of big cities and small children, machinery, televisions, iThings, etc. Give these tracks a shot; you won’t be surprised at all.

END_OF_DOCUMENT_TOKEN_TO_BE_REPLACED

In college I was a creative writing major, and that same subject was my favorite class ever to teach in high school. Were I to still be teaching the class, I think I’d probably use the text to Belleisle’s track “Talks a Lot” as a classroom sample of the “every poem is a song” idea. The song, from the 2008 album Longstanding, exhibits a narrative sense that I just love. Speaking of love, I’m starting to feel that way about Belleisle, (and it’s not just because I used to go to the Frederick Law Olmstead-designed Detroit park of a similar name when I was a kid). The Montreal-based team of Rebecca Silverberg and Tasha Cyr make up the core of Belleisle, and their smooth delivery and surprisingly tasteful moments of dissonance are making me smile a whole lot, making me want to wax poetic.

END_OF_DOCUMENT_TOKEN_TO_BE_REPLACED

It started in October. The holiday season kicked into full swing with Halloween, which might be the most anxiously awaited holiday of the year at my house. I suffered a serious knee injury the week before Halloween, but we had the November elections, Thanksgiving, and Christmas arriving before we knew it, with all the hussle and bussle that go with them. It continued into January with my wife’s birthday and some major issues at work, and then we finally got to February where they continued. It feels like we’ve been running non-stop since October. Prior to this weekend, we’ve been out of town for five weekends in a row. My music choices have been changing as I’ve tried to keep up the pace. Faster, faster, if it didn’t have enough BPM’s or pounding energy, I wasn’t working for me. I found myself listening to a lot of Black Flag, Bad Religion, the Specials, and the Projects on the train ride to/from work.

Don’t get me wrong; it has been good times, a whole lotta fun with family, friends, and great places. But it was all starting to catch up with me. Last week I was on my fourth cold of the season, my knee is in bad shape as I’ve been doing hard rehab in a final attempt to avoid ligament reconstruction surgery, and my body has felt like it’s falling apart. On Saturday, finally at home for the first weekend in six, I downloaded the Houston duo Papermoons’ “Follow the Sun,” a delicate, melodic song of peace and tenderness, fell asleep at 9 pm, and had the best night of sleep I’ve had in months. Coincidence? Maybe. But maybe not.

END_OF_DOCUMENT_TOKEN_TO_BE_REPLACED

Mona and Anar were destined to make this music together. That’s the only explanation of how they can (seemingly) effortlessly create such beautiful, personal, intimate, and delicate music. Their second LP The Hot Summer is out now, again self-released; why there aren’t labels lining up to get their John Hancocks on the dotted line is beyond me.

Original Post Sept 17, 2007:
Travels is the duo of Mona Elliott of the band Victory at Sea and Anar Badalov of Metal Hearts. The two met and fell in love while their bands toured together, and Mona has recently battled breast cancer. So they have quite a lot of emotion to put into their deliberate and simple music, which is full of a sense of togetherness and enjoyment that could only come from their combination.

END_OF_DOCUMENT_TOKEN_TO_BE_REPLACED

Adding to our slowcore archive always delights me. Sometimes something really mellow is exactly what you need. Right around New Year’s seems to be one of those times. There’s always so much going on around the holidays and then there’s a brief moment of reflection around the new year just before you jump back into your daily grind. Unlearn encourages us to do otherwise. Unlearn the daily grind. Un-do bad habits. Add constructive ones. Don’t speed back up. Make time to experience the unexpected, the new, the mundane. Seattle’s Unlearn create epiphanic post-rock songs, much like Sigur Ros or the quieter moments of Mogwai, songs that build slowly, extend those moments of reflection, and spark new connections in our paved-over synapses.

END_OF_DOCUMENT_TOKEN_TO_BE_REPLACED

Today’s Christmas special comes courtesy of Brushfire Records. Looking for last minute Christmas music? Download this festive collection and 25% of the profit goes to support children’s music education. Lots of stocking stuffers here from Matt Costa, Money Mark, Rogue Wave, and of course Jack Johnson, but I can never pass up Neil Halstead’s toe-tapping authenticity song, so I’m passing this one along to you. Merry Christmas. Happy Hanukkah. Cheers.

END_OF_DOCUMENT_TOKEN_TO_BE_REPLACED

It was a colder-than-normal Sunday when the new Horse Feathers CD went into the car stereo. We had the boy and his cousin with us and were searching for the perfect pumpkin patch to take their photo â€” yâ€™know, to get that genuine â€œweâ€™re a happy familyâ€ feel. The patch we found turned out to be muddy and, as a result, a messy wonderland for the boys. The music was a wonderland for us grown-ups: soft vocals with shades of Iron & Wine and St. Vincent, acoustic rhythm and sweet stringed melodies. It even got the little turds in the back seat to pause for a second of reflection before going back to demanding cookies and juice.

END_OF_DOCUMENT_TOKEN_TO_BE_REPLACED

My parents put a pool in their backyard recently, years after my brothers and I moved out. Kind of a jip, except they did give us a key and the code to the pool cover. So I can’t really complain. Do you know how good it feels to relax in a warm, bubbly hot tub on a brisk fall evening? Really good, right? The simple, quiet, lovely melodies from the Avoidance Theory provide that same cozy feeling. As a matter of fact, when I put my feet up to the speakers I get that same jet-blasted massage from these songs. Recommended if you like warm baths and a more ethereal, trippy Dean Wareham sound.

END_OF_DOCUMENT_TOKEN_TO_BE_REPLACED 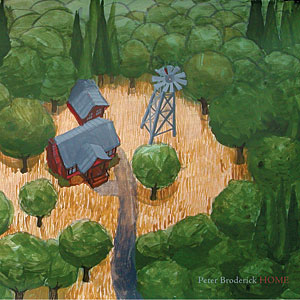 Peter Broderick’s new album Home isn’t much more than a guitar, his voice, and occasional percussion. Anything else frankly would get in the way. At a moment in time when most of the industrialized world is bent on multi-tasking themselves to a living death Broderick sheds himself of distractions and focuses on his precision finger-picking guitar playing, his lush vocal washes, and his zen-like compositions. If you’ve been feeling like you’ve been swept up in a figurative hurricane, or if you’ve been cleaning up after Ike himself, let Peter Broderick breathe a soul-cleansing burst of pastoralia into you. Let him be the eye of the storm of life. Be sure to check out Broderick’s band Efterklang.

END_OF_DOCUMENT_TOKEN_TO_BE_REPLACED

That Omaha ain’t that great sometimes isn’t really news. I’m from Detroit; tell me about it. That glimmer of hope for a better tomorrow is usually dashed somehow, in political scandal, murder, the weather, whatever. McCarthy Trenching, fronted by Nebraska singer-songwriter Dan McCarthy, captures acutely the extinguishing of that glimmer. All three of these songs are about as down as you can get, full of missed opportunity, booze, etc. And based on how natural and real they sound, you’d think McCarthy was a Michigan boy.