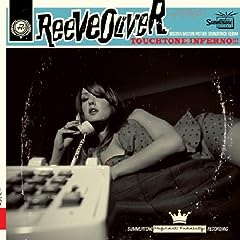 Did you notice? Reeve Oliver’s initials are R.O., the first two letters in the word “rock.” You know where I’m going with this don’t you? Well, they do! They rock like alternative radio circa the late ’90s when bands like Foo Fighters were ruling the airwaves and alternative radio wasn’t all that alternative any more. Reeve Oliver is one of those no-it’s-not-a-dude-but-the-name-of-their-band bands from San Diego who recently recorded their second album courtesy of a major label only to have the major label back out of the deal. Luckily, the band was able to get control of the record so it didn’t end up getting shelved, out of sight, out of mind for years. A few songs on this new album are re-recordings of previous releases, the band wisely choosing to spend big money production on their strongest songs, e.g. “Yer Motion.” I dig the band’s oh, so tasty melodies, melodies you wouldn’t usually hear on a rock record. They remind me a lot of Erik Voek’s lithe vocal melodies, a genius, under-the-radar pop recluse that I can never get enough of. And really, when you’ve got a secret weapon like O. (Olivelawn, Fluf) up your sleeve it’s pwnage time. Play often, play loud, play now.