Lazy Knuckles is the sample-based experimental project of Ohio’s Brandon Klaiber. The word Bucolic, the title of his debut full length, means “of or relating to the pleasant aspects of the countryside and country life”. The chilled out, lo-fi beats on Bucolic hit that definition to a T – it’s like listening to the leaves change.

Check out one of the standout tracks, “Sudser”, below to see what I mean. Bucolic is the soundtrack for enjoying the last few days of summer/first few weeks of fall. Enjoy.

Bucolic comes out digitally on September 11 via Gold Robot Records.

You can also check out/download another track “Dreams of Memories” from Gold Robot’s Soundcloud page.

Beat maker L’Orange and wordsmith Jeremiah Jae have collaborated to create one of the best grooved-out hip-hop albums of the year, The Night Took Us In Like Family. L’Orange’s dusty beats are on point and Jae flows with them like these two have been working with each other for years.

I was unable to get permission to share any downloads, but please enjoy the streams (below) of the jazzy “Taken By Night” and head-bobber “All I Need” feat. Gift of Gab. Both tracks are rad and represent the entire album well.

The Night Took Us In Like Family is available now on vinyl (recommended) or digitally from Mello Music. This is a must add to your collection. Enjoy

After a long holiday break, I feel refreshed and ready to start bringing the hits again. For the first post of 2015, I am stoked to be sharing a couple tracks from the upcoming Monster Rally & Jay Stone collaboration, Foreign Pedestrians.

Monster Rally’s hazy, exotic beats mixed with Jay Stone’s razor-sharp vocal delivery are a match made in Heaven and hopefully the first of many collaborations between the two. I can’t recommend this album enough. You must buy it now. Foreign Pedestrians is possibly the best album of 2015.

Foreign Pedestrians will be released on January 27 through Gold Robot Records. 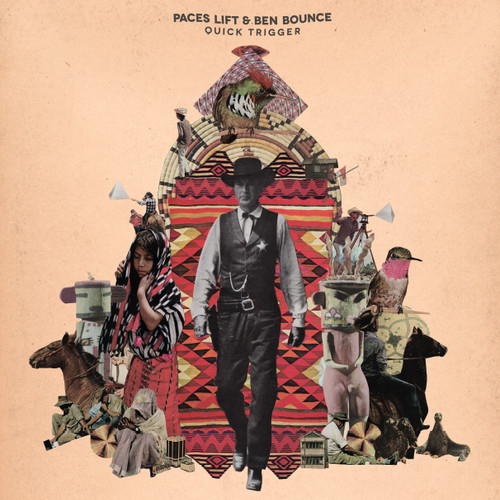 After a 30 day “one beat from both of us everyday” challenge Seattle’s Paces Lift and St. Louis’ Ben Bounce created the framework for their new collaboration LP, Quick Trigger. Two years of mixing and fine tuning, their masterpiece Quick Trigger was ready for consumption. The result is fourteen lo-fi, psychedelic, beat driven tracks sprinkled with bits of spaghetti western and old vinyl crackle. It’s a solid release which has quickly risen to the top of my albums of the year list.

Quick Trigger is available now on killer looking “ox blood” vinyl with cover art done by none other than Ted Feighan (aka Monster Rally) from Wax Thématique. It’s also streaming and downloadable from Paces Lift’s Bandcamp page. Feast your ears on some of Quick Trigger‘s goodness below. Enjoy!

If you like listening to cut up bits of soul, tropical, world and basically any other genre of music all mixed together with some slick hip-hop beats, then Cleveland’s RUMTUM (aka John Hastings) is the artist for you. Even if this concept seems completely foreign to you, trust me, you will dig this.

RUMTUM released his debut LP Mystic Wonders back in September on 1320 Records and his own Bandcamp page. He has also collaborated with the one and only Monster Rally on a couple EPs. Enjoy the songs below, they are just a taste of RUMTUM’s greatness. Now get out there and track down the rest of his stuff, all of it is must have music.

Ted Feighan is back with Return To Paradise, his best Monster Rally release yet. Check out opening track “Orchids” (below), it’s a killer mix of old vinyl crackle, hip hop beats and pure tropical bliss. This album is solid, and does just as it’s title suggests. Return To Paradise comes out on October 29. You can get it on vinyl from Gold Robot or digitally from Monster Rally’s Bandcamp page. I highly recommend it. Enjoy.

I’ve been a huge fan of San Diego’s TV Girl ever since I stumbled upon their self-titled EP on their Bandcamp page back in 2010. Their blend of electo-indie-tropical-surf-lo-fi pop music is very addictive, like eating potato chips, you can’t just listen to one song.

They are realeasing their new EP Lonely Women today. It’s so damn good. It’s been on repeat almost non-stop since they sent it to me. You can sample their coolness below on “She Smokes In Bed”. The driving beat of this song is sure to get your head bobbing up and down. You can buy the new EP digitally or on cassette at their Bandcamp page, I suggest that you do, it may become your favorite release of the summer. Enjoy!

I can often spot a musician’s child after just a few bars. But I couldn’t have told you what the son of heavyweight-boxer-turned-community-lawyer sounds like until I heard Homeboy Sandman. And yet it somehow makes perfect sense. HBSM’s low-key timbre and minimalist production aesthetic belie his wicked talent for socially responsible wit and infectious wordplay. He goes hard without the crutches of stacks, gats, or tricks. His verses duck and weave, bouncing you off double negatives and triple entendres until you don’t know which way is up — and don’t care. It’s a good kinda dizziness and he’s been serving it all year long: to the tune of two EPs and a full-length(!). These downloads offer a good taste of his steez but make sure you check his coup de gras, “Look Out” from the Chimera EP, before you cast any final verdicts.

For years music critics have loved to handicap grown-folk-music-performed-by-young-folk. It’s as though the younger a musician is, the more forgiving we should be of their songwriting (remember Ben Lee?). With that, I won’t even mention Jesse Futerman’s age because his deep, soulful music speaks for itself. The Toronto-based producer has been building a following through his SoundCloud mixes and finally pulled together an EP you can download for free here. I can’t tell if it’s the seasoned groove or the painfully short playing time of these tracks that leaves me yearning for more. Either way, I hope to hear from Jesse again soon.

On paper, Socalled’s bio reads like an elaborate art hoax: he’s a producer/ composer/ arranger/ rapper/ singer/ journalist/ photographer/ filmmaker/ magician/ cartoonist/ puppet maker – oh, and Yiddish music enthusiast! – who, for his fourth album, invited 34 collaborators from all ends of the musical spectrum into the studio. As a whole, Sleepover is disjointed – sounding like “Prairie Home Companion” one minute and “106 and Park” the next. There’s a recurring thread of humor and pastiche on many of the tracks, but others stick out as being quite earnest. So it’s difficult to nail a unifying theme. However, taken individually, each song holds its own, and some even stand out. Take these two examples, where the eclectic ingredients come together nicely into a singular concept. The title track is a send-up of ghetto-tech anthems, with none other than Detroit’s own King of Booty, DJ Assault, serving up hypnotic refrains over a frenetic klezmer loop. (The joke wouldn’t be complete without puppets freaking in Socalled’s apartment – so be sure to watch the video.) By contrast, “Work With What You Got” is a positive vibration calypso-hop jam featuring Roxanne Shante and The Mighty Sparrow on vocals that would feel at home on the soundtrack to a feelgood children’s movie.

Socalled || Teaser Sleepover #2 from Dare To Care Records on Vimeo.